Can I use my clothes iron in Angola?

Using a clothes iron in Angola

Bringing your clothes iron from home? Make sure it works at your travel destination beforehand without taking any chances!

Will my clothes iron work in Angola?

Does your clothes iron have the right power plug?

Do the outlets look different in your country? You'll need a power plug adapter.

If you are not sure, you can use the tool on this page to check if you need a power adapter for Angola.

How to check the voltage of your iron

To check the voltage that is supported by your clothes iron you should look for a label or numbers printed on the handle, base or power plug, the exact location will vary depending on the make and model of your iron:

If you can't find the voltage on your device, be sure to check the instruction manual that came with your iron.

Single voltage irons will have a single number such as 230V or 110V. If this number matches the 220V used in Angola, you can use your clothes iron in Angola.

It is also possible that a single voltage iron supports a small voltage range such as 220-240V or 100-120V, which means that the iron can handle small fluctuations in voltage. As long as the 220V used in Angola falls within this range, your clothes iron will work in Angola.

Dual voltage irons, such as travel irons, will list a larger voltage range separated by either a dash or a slash, for example 100-240V or 100/240V. If this is the case for your iron, you can use it in Angola, because dual voltage travel irons can be used in all countries.

What if my iron doesn't support the voltage used in Angola?

If your iron does not support the 220V used in Angola, it's probably best to go for a travel iron. This is the cheaper option compared to buying a voltage converter.

Travel irons are specifically designed for travel, lightweight, often with a folding handle and capable of handling different voltages. This means they will work in any country you choose to travel to.

Do make sure your travel iron is set to operate in 220V when plugging it in. The voltage switch is normally found on the base or the handle of the iron, you might need a coin to turn it.

When plugging in, your iron's plug should still be compatible with the outlets used at your destination. If this is not the case, you will still need a power adapter. 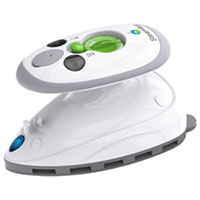 Because of these reasons you are usually better of using a dedicated dual voltage travel iron instead of a voltage converter.

Send us some love

We'd love to get your feedback!